Motorcycle Accident (Not my own) 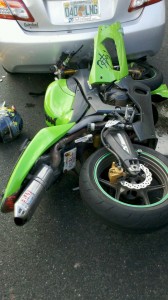 So, a friend of mine got into a motorcycle accident yesterday… here is his description of the accident:

So an update on what happend yesterday. I pretty much totaled my bike yesterday because the lady in front of me decided she wanted to slam on her brakes and when I tried to do the same I think I locked up one or both of my tires. I ended up highsiding into her trunk. I walked away from it for the most part. I ended up with a pretty bad concussion and a dislocated jaw, elbow, and shoulder along with a couple loose teeth and I bit a whole in part of my lip and a couple of bruised ribs along with some minor road rash on my knee and some miscellaneous bruises. all in all I’m just happy it wasn’t worse

My take on this: Sounds to me that he locked up his rear tire, allowing the rear end of his bike to swing a bit before impact. Along with this, it sounds to me that he was following entirely too close, which is really not surprising. I know a lot of motorcyclists who get behind other vehicles entirely too closely, and I observe it in groups of motorcycles all the time. For whatever reason the whole two second rule never seems to get into their heads, and when it comes time to hit the brakes because the person in front has hit their brakes hard, disaster is the result. 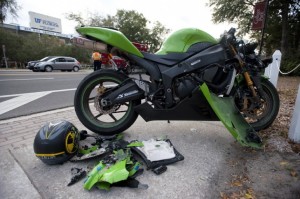 📂This entry was posted in Biking

One Response to Motorcycle Accident (Not my own)