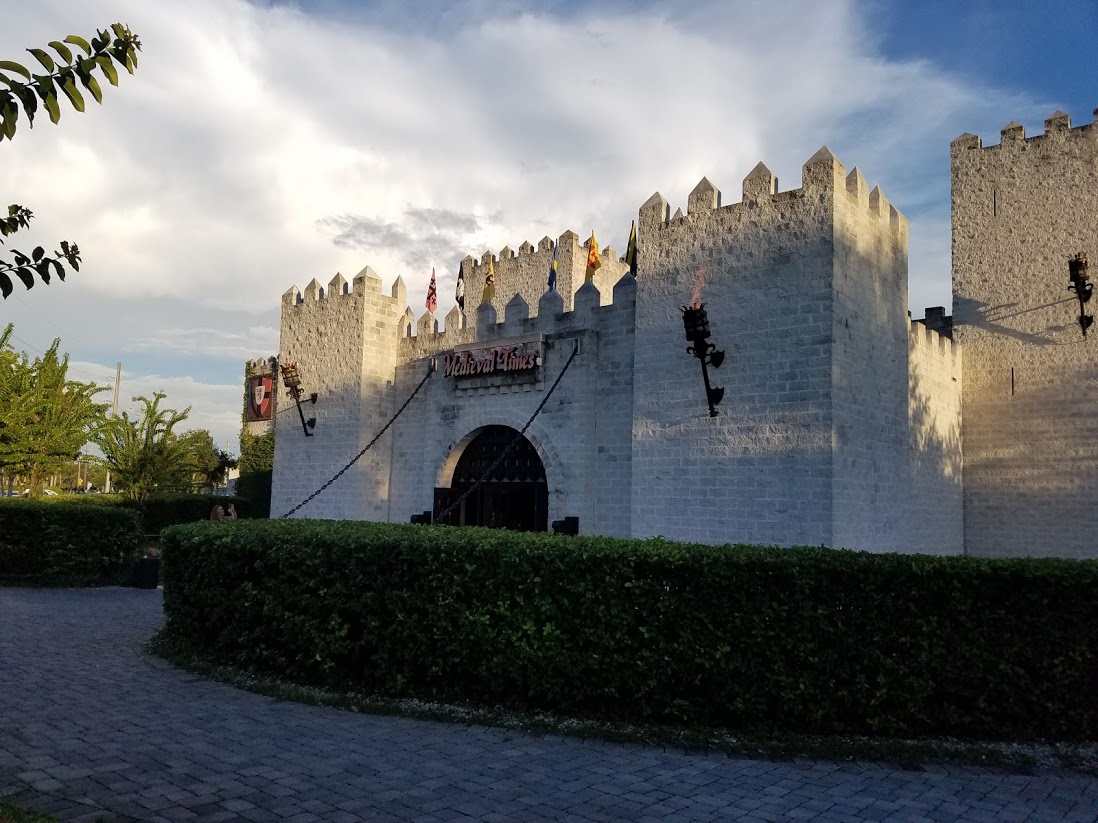 I had the opportunity to go to Medieval Times this past weekend. It has been about ten years since I have been to a show (the last time was up in Myrtle Beach) so I figured it would be a fun time, since I was going with a good sized group of friends and we dig this kind of stuff.

Some background: I have been working with a stage show for a medieval fair for the last fifteen years, where we do performances with stage combat all day long. While we do not have any horses in our show, we do use live steel (i.e. steel weapons that are dulled, but not covered in foam) so safety during our shows are paramount.

So here we are at Medieval Times. First, the cost is not cheap. We got in at a sizeable discount, but it was still close to $50 a ticket for each of us. Parking outside is not really an issue. As you walk from the parking lot to the main building you pass by a “Medieval Village” that frankly looks like it has been abandoned and is no longer in use. We were going to go around and look at it, but that time never really came about.

Entering inside, you get your laminated pass and show it at a kind of gatekeeper, where you receive a crown colored in such a way to depict your favored knight and where you will be sitting. Ours was the yellow knight. You then enter a large common room where you can walk up to the bar and purchase drinks, or other vendors where you can purchase glowing swords and other trinkets. All of these items are hellaciously expensive, of course… drinks in particular are very high, and we saw situations where a single drink could cost you $30 or more if you got the souvenir mug.

Small shows were going on around the common room, introducing various characters of the show that we were about to watch, that sort of thing. Unfortunately, unless you pay close attention to everything that is going on, it can be very hard to understand any of what is going on… more on this later.

Eventually the horns announced that it was time to enter the arena, and we were loaded in much like a 747 at the airport is loaded, by VIP passes, then by section. All I needed was my luggage and I would have been all set. Walking in, the field was bathed in a blue light, making it look as if they were going to do this show on ice. I would have payed more to see this show if it were being done on ice… can you imagine horses wearing ice skates? Getting down to my seat, I was fortunate to be seated at the very end of my row, so I had some extra room. The seating is very cramped, which is unfortunate.

In front of each place is a plate, a mug, and a bowl. You are first asked what you would like to drink, whether it be water, pepsi, or iced tea. No mention was made to me about the fourth option, lemonade, but I heard it from the row in front of me, so I asked for that instead. They have two major rules concerning the eating… the first is that you not bang your plates or mugs or anything as it disturbs the horses, and the second is that there are no eating utensils… everything is finger food. The menu is a set menu, consisting of tomato soup, a quarter chicken, corn on the cobb, a baked potato, and for dessert a wedge of lemon cake.

So obviously the cost of entry (usually around $63) is not the food. The food you could get anywhere for about $10. Most of the money is going towards the show, so let’s focus on that.

Remember what I was saying about paying attention to everything that is being said in the show? Yeah, if you don’t do that, and you get distracted by things like the food being brought before you, or questions asked by your server (he was great, by the way), or comments from people around you, or half a dozen other things that are going on, you will understand why the queen is distraught, why the king is… missing (I have no idea where the heck he was), why the tournament is being held in the first place, or why the queen allowed a good number of her knights (you know, her fighting force that would defend the castle and her kingdom) be grievously hurt during a tournament.

So basically you are then left with the horses, the horsemanship, and the fighting. The horses are well trained, I will give them that, but I expect they would be if they are basically doing this same act every evening (or less… I don’t know what their schedule is like… I assume they get rest days). The horsemanship is also decent, but don’t expect Olympics quality work here. I didn’t see that level of equestrianism.

Which then leaves the fighting, a subject by which I am much more informed about. In a word, it was… average. Some good moves, but I have seen a lot better. I have seen much more realistic dismounts of jousters as well. These fighters do get a bit more flashy because they use swords made of titanium (hence the brighter white sparks). Pretty much any sword will spark like that if you hit them in the right way, but the color given off is a dead giveaway. Lots of rolls (some of which simply don’t make sense to the fight), but the actual weapon moves are what my group would classify as mostly basic with a small of amount of mid-level.

However, the sword fighting is the spectacle that makes the show and provides them with business, and in the darkness with the sparks flying and the loud crashes, it makes for a good show even when you have no idea why they are actually fighting.

📂This entry was posted in Drama Food Yelp